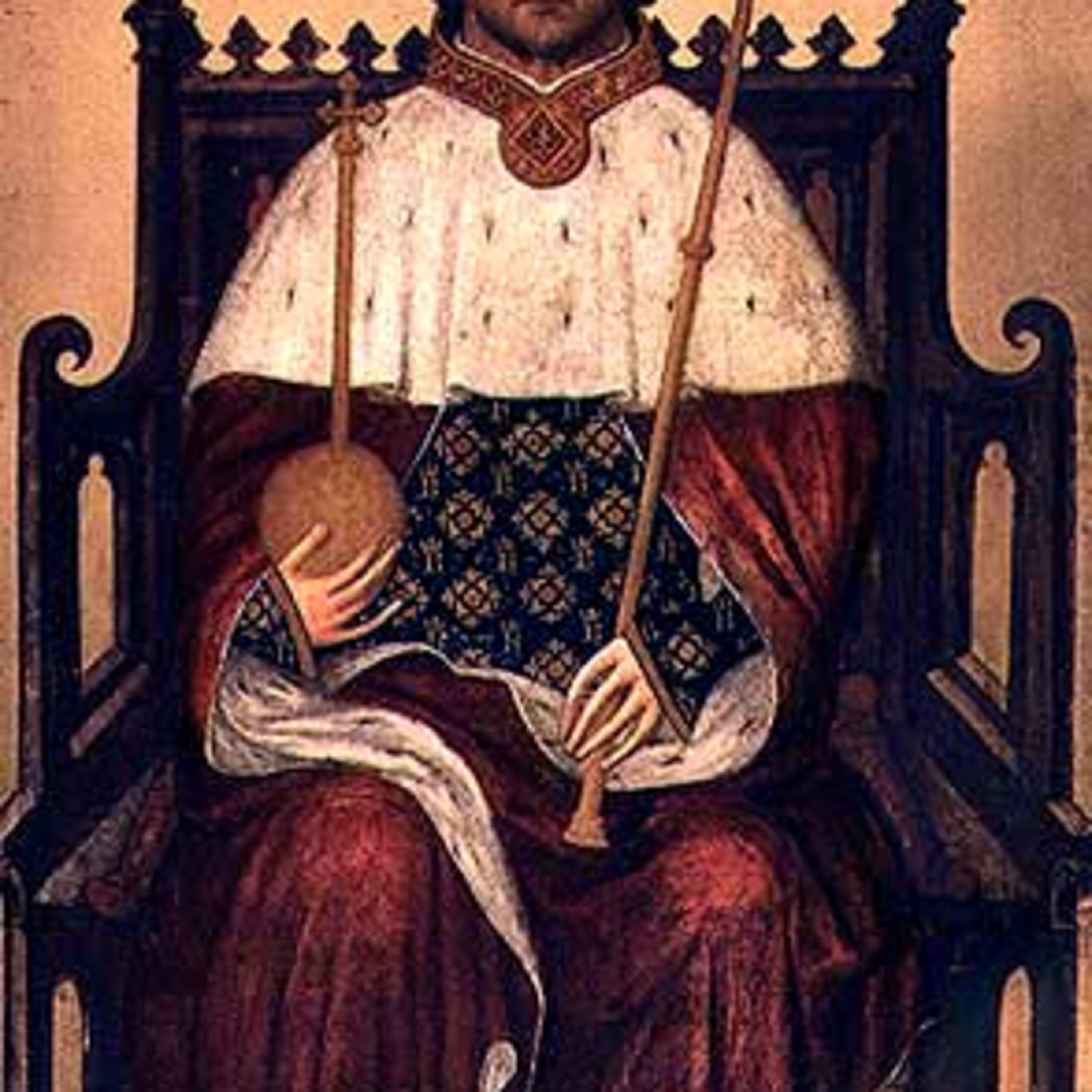 By: William Shakespeare (1564-1616)
The Tragedy of King Richard II, by William Shakespeare, is the first of the history series that continues with Parts 1 and 2 of King Henry IV and with The Life of King Henry V. At the beginning of the play, Richard II banishes his cousin Henry Bolingbroke from England. Bolingbroke later returns with an army and the support of some of the nobility, and he deposes Richard. Richard is separated from his beloved Queen, imprisoned, and later murdered. By the end of the play, Bolingbroke has been crowned King Henry IV.
Audio edited by J. M. Smallheer and John Gonzalez. (Summary by Laurie Anne Walden)
Characters:
Narration, Keeper, and Lord – read by Annie Coleman
King Richard II and First Servant – read by Peter Yearsley
Northumberland and Gaunt – read by Chip
Bolingbroke – read by Kayvan Sylvan
Aumerle – read by John Gonzalez
Henry Percy – read by Michael Sirois
York – read by Martin Clifton
Mowbray – read by Mark F. Smith
Surrey and Willoughby – read by Nikolle Doolin
Salisbury – read by David Barnes
Bushy and Carlisle – read by Cecelia Prior
Bagot, Abbot, Scroop, and Exton – read by Linton
Green – read by deadwhitemales
Queen Isabel – read by Joy Chan
Duchess of York – read by Kristen McQuillin
Berkeley – read by Rainer
Ross – read by Mr. Baby Man
Fitzwater and Groom – read by Sean McKinley
Marshal – read by Lenny Glionna Jr.
Captain and First Herald – read by Hugh Mac
Duchess of Gloucester – read by Gesine
Lady – read by Maureen S. O’Brien
Gardener, Second Herald, and Second Servant – read by Kara Shallenberg
http://www.audioowl.com/book/the-tragedy-of-king-richard-ii-by-william-shakespeare

3d ago3d ago
Subscribe
Unsubscribe
أسبوعيا
Overdue is a podcast about the books you've been meaning to read. Join Andrew and Craig each week as they tackle a new title from their backlog. Classic literature, obscure plays, goofy childen’s books: they'll read it all, one overdue book at a time.
F
Fire on the Mound

6y ago6y ago
Subscribe
Unsubscribe
شهريا
“The fire does not come from the mind.” One thousand years ago... Mtilan, the Unborn King, pledged his life to Legion, the fallen spirit from beyond the veil of time. Through dark and forbidden magic the broken man gained both immortality and incredible power -- but lost his soul. Over a millennium later Pekra and his sister Lely race to find the mythical cottonwood tree and protect it from Mtilan and his master Legion -- but to succeed they must first befriend their father’s killer -- a for ...
i
iFanboy - Comic Books

8m ago8m ago
Subscribe
Unsubscribe
أسبوعيا+
The iFanboy.com Comic Book Podcast is a weekly talk show all about the best new current comic book releases. Lifelong friends, Conor Kilpatrick and Josh Flanagan talk about what they loved and (sometimes) hated in the current weekly books, from publishers like Marvel, DC, Image Comics, Dark Horse Comics, BOOM! Studios, IDW, Aftershock, Valiant, and more. The aim is to have a fun time, some laughs, but to also really understand what makes comic books work and what doesn’t, and trying to under ...
1
1001 Heroes, Legends, Histories & Mysteries Podcast

5m ago5m ago
Subscribe
Unsubscribe
أسبوعيا
Where History Comes Alive! A fast-paced, well-researched weekly podcast covering a wide range of historical events, persons, places, legends, and mysteries, hosted by Jon Hagadorn. 1001 Heroes Podcast is a proud part of the 1001 Stories Podcast Network, which includes 1001 Classic Short Stories & Tales Podcast, 1001 Radio Days, and 1001 Stories For the Road Podcast. The network enjoyed over 5 million listens in the past year from a worldwide audience. SUPPORT OUR SHOW BY BECOMING A PATRON! w ...
A
ABC RN Arts

2m ago2m ago
Subscribe
Unsubscribe
يوميا
Each week day RN Arts programs zoom in on a specific area of art and culture, brought to you by a specialist presenter. Subscribe to their podcasts separately by searching by name in your podcasting app.
B
Beneath

11+ y ago11+ y ago
Subscribe
Unsubscribe
شهريا
Three thousand years after a chunk of iron the size of Khufu’s pyramid collides with Europa, Jupiter’s sixth moon, an asteroid borne of the collision crashes into Earth’s Arctic ice shelf carrying extraterrestrial microbial life. The first man to come into contact with the microbes hears voices—and then dies. After determining the meteorite originated from Europa, the Global Exploratory Corporation sends oceanographer and biologist, Kathy Connelly, and her crew to the moon aboard the Surveyo ...
G
Geek's Guide to the Galaxy - A Science Fiction Podcast

2+ y ago2+ y ago
Subscribe
Unsubscribe
شهريا
Ryan Jennings ran from the horrors of Crayton 18 years ago. Now is is coming back to face his greatest fears and search for answers.
T
The Book Review